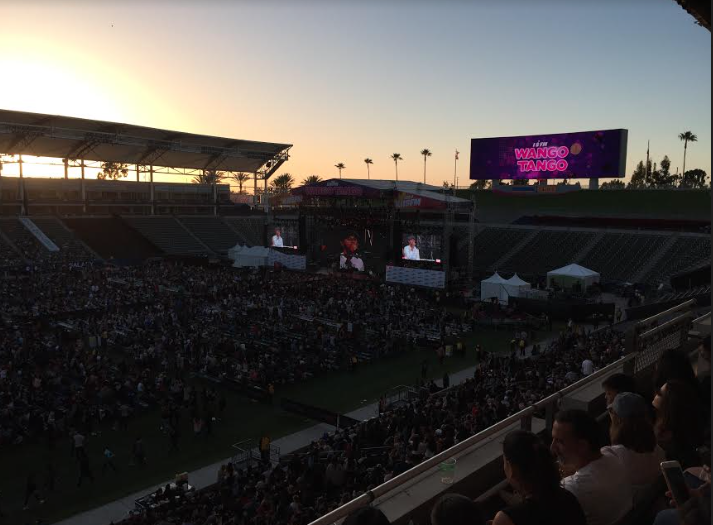 Concert doors opened at 4:30 p.m., and my sister and I were dropped off at 1 p.m. We met up with our cousins at the Wango Tango Village. The Wango Tango Village is a free event and is open to the public. They have performances from other artists and many sponsors of the event give out free items. This year’s village showcased Olivia Holt, Hey Violet, Noah Cyrus, Jordan Fisher, Aaron Carter, and Ocean Park Standoff. During this time, the DJs and hosts of KIIS go on stage and hold contests giving away tickets to the actual event, or they will upgrade your seats. Instead of watching the performances, I walked around to the different booths. From the Fujifilm booth, my cousins and I got polaroid pictures taken and got a swag bag filled with goods. We got free funnel cakes from the “What the Funnel” booth, and free lemonade and sodas from Coca-Cola and Hubert’s Lemonade. There was also a booth giving out bags of Maltesers, tacos, and Otter Pops. At around 4 p.m., we left the village and got into the line to get into the stadium. The lines were long, snaking around the sidewalks and spilling onto the road. Luckily, we got into a fast-moving line, and we got in by 4:45.

When we walked in through the doors of the stadium, we were immediately greeted by the buzzing atmosphere. People were quickly walking from place to place, and the aroma of food coming from the food trucks filled the air. Katy Perry was supposed to go on exactly at 5, and we had to walk half the stadium to get to our seats. We ran in order to get there on time, and we made it into our section as Katy Perry came on stage. Unfortunately, the sun was shining directly onto our section of the stadium, and since it is an open stadium, we spent the first hours of the concert squinting to see the performances and getting our faces burnt. Katy Perry’s set consisted of her famous songs which include, “Teenage Dream,” “Bon Appetite,” “Roar,” “Firework,” and “E.T.” Following Katy Perry, was Noah Cyrus. Noah Cyrus is a rising singer, and also the younger sister of Miley Cyrus. She performed her popular song with Labrinth, titled “Make Me,” and also performed new songs that will be featured on her upcoming album, “NC-17.” By then, it was already 6 p.m., and we were now waiting for Niall Horan to get on stage. Niall’s appearance is one of the main reasons why we bought tickets, and we had to wait another hour and 15 minutes to see him. Niall was supposed to get on at 7:15 p.m., which meant we had to go through more acts. Hailee Steinfeld followed Noah’s performance and she performed her songs “Starving,” “Most Girls,” “Love Myself,” and “You’re Such A.” Following Hailee Steinfeld was Julia Michaels, who only performed one song, titled “Issues.” Machine Gun Kelly performed right after with Camila Cabello and Hailee Steinfeld singing along with him to songs off of his new album. After this set, the anticipation was building up. All in our row, I could feel all of my cousins waiting for Niall to appear, and I knew that I was not ready to hear or see him live. It was already 7:07 p.m., and we were preparing ourselves for Niall to emerge onto the stage with his band and his guitar. Suddenly, an announcer came out to announce the next performance. We were all breathing quickly, waiting for him to appear when they called out Luis Fonsi’s name. For those of you who don’t know who that is, he recently released a song named “Despacito” that is taking the nation by storm. It has a catchy tune, that will tempt you to get up and dance, and it did just that for us. My cousins and I got up and started singing and dancing to the song. Everyone in our section was staring at us because we happened to be some of the only teenagers there. (For some reason, everyone seated near us seemed to be middle aged.) After calming down, we were all filled with energy, when Niall’s name is called out. I immediately get up to my feet and with my cousins, we scream our lungs out. Multiple heads turned around to look at us, and shake their heads in disapproval, but we did not care at all. Niall immediately jumped into song with his first single, “This Town.” I yelled out the lyrics with the rest of the stadium, and by the end of the song, I was a crying mess. He then jumped into a new song that hasn’t been released yet, titled “On the Loose,” which didn’t help with my crying. He took a water break after and talked to the crowd. He then did the unexpected and sang a cover of Dua Lipa’s “Scared to Be Lonely,” which ruined me even more. After that cover, he played his last song of the night, which is also his latest single titled “Slow Hands.” He soon left the stage, and we erupted in screams once more.

After Niall’s performance was a small intermission. The stadium just started putting music on the speakers and the crowd sang along. After the short intermission, it was time for Miley Cyrus’ performance. Four days prior, she released a new single titled “Malibu.” Before performing, she told the crowd that the upcoming performance is the first ever live performance of “Malibu.” I didn’t hear the song before the concert, so her performance was my first time hearing it. It was a beautiful and peaceful song, and her set was covered in pastel balloons, which brought a peaceful attitude into the stadium. Immediately after, she jumped into a cover of “Jolene”, and ended her set with “We Can’t Stop.” Halsey came after Miley and she performed two of her new songs, “Eyes Closed,” and “Now or Never,” and her song “Colors.” By the time Halsey’s set finished, the sun fully set, and the crowd was now ready for Maroon 5. With the sky now dark, the colored lights flashed through the crowds, and the band emerged on stage. Immediately, the crowd screamed. They started off by playing “Moves Like Jagger,” followed by “Sugar.” Maroon 5’s set was one of the longest, which ran for about 10 minutes. After Maroon 5, came Zedd and a special performance by Alessia Cara. Zedd’s set was as long as Maroon 5’s. His set was filled with different types of beats and songs, pumping the crowd up. Different visuals and flashing lights accompanied his music. When the beat would drop, hands would go up and people would jump up and down. Towards the end of his set, Alessia Cara came out to sing “Stay.” For the finale of the show, was the much awaited Backstreet Boys. Suddenly all around us, everyone was standing up. The same people that were giving us looks earlier when Niall came on, were now the same ones yelling their heads off when the first notes of a Backstreet Boys song came on. Since we didn’t know most of the songs they sang, we sat down for the majority of their set, but when “I Want It That Way,” came on, we immediately jumped up and sang with the rest of the crowd. When that song ended, we started making our way out in order to avoid traffic, and as we were walking out, they played their last song, “Everybody.”

Wango Tango was an experience that I’ll never forget. At the end of the long day, I was tired, yet content with the entire day’s happenings. For those of you that have yet to experience concerts, let me tell you now that it is one of the best things in this world. You have this crowd of thousands of people singing one song with you, and there is this beauty in it. I saw that beauty in Wango Tango, when the entire crowd joined in with Maroon 5 and with Zedd when he played “Break Free,” and “Clarity.” Wango Tango will take place again next year in May, and will most likely be at the StubHub Center. To all the future concert-goers: make sure to go to a concert where you really love the artist, because it’s part of the experience. To all the current concert-goers: Keep rocking out to your favorite artists, and feel free to comment what your favorite things about concerts are!