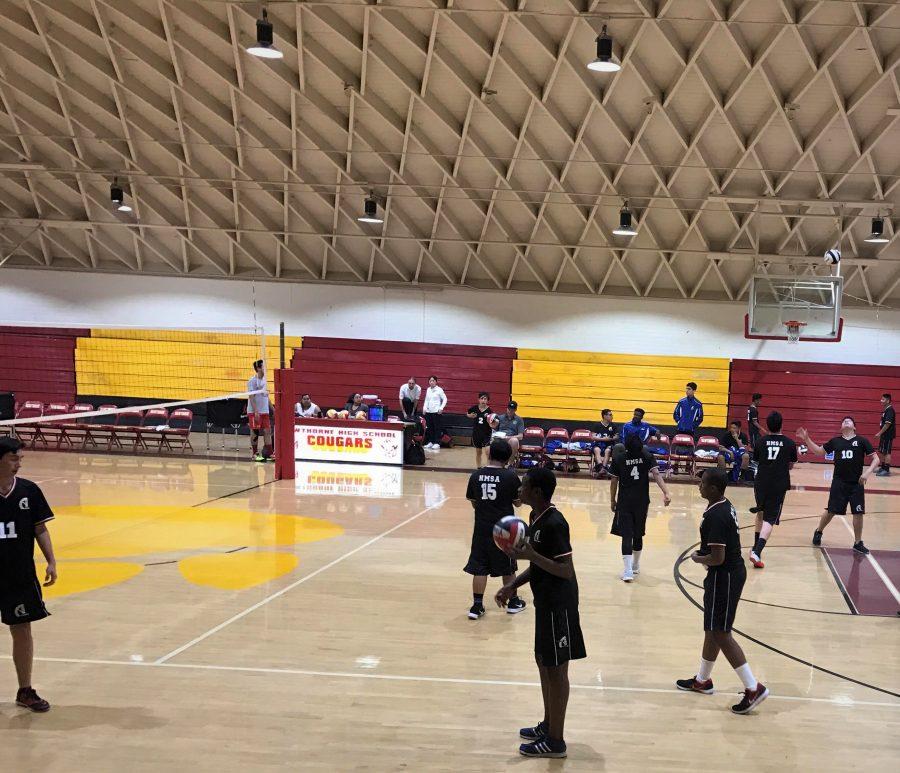 The Boys Volleyball Team warming up before their game against Hawthorne High.

HMSA’s boys volleyball season has begun and consists of successes and challenges. However, the boys continuously use their success and setbacks to further improve their game.

Both junior varsity and varsity played against Hawthorne High on March 14 at Hawthorne High’s gym. The rivalry against both Hawthorne teams called for exciting games. The previous year, the Aviators had played the Hawthorne Cougars with great tenacity but couldn’t obtain a win. This year, the boys were ready to return and display their new skills.

Even though both JV and Varsity were not able to take home the victory, they demonstrated great skill and teamwork. JV was led by Team Captain Orlando G. who later stated, “The JV team has improved in communicating, serving, and passing. I’m really proud of the progress they have made so far.” The crowd sitting in the stands could clearly see the communication on the court, like Orlando stated, that led them to have smart plays on and off the net. After a rough first set, the boys were back on the court with a clear mind ready to confront the second set. The manner in which they focused on the second set benefited them as seen by the close final score of 22-25. Their consistent plays displayed how they fight until the end.

Varsity was up next and once again exhibited true sportsmanship. Not only was their skill on the forefront but also the support they have for each other when on the court. As for the game play, the Aviators were strong on the net when blocking and making kills like Team Captain Erick M. declared “The team did very well blocking. We were constantly pressuring the opponent and obtained many points off blocking. Although we came up short of victory, we fought hard to stay in the game and put pressure on Hawthorne High.” In addition, the Aviators’ quick feet allowed them to make successful plays after diving for short balls near the 10-foot line and after hustling back for a shanked ball. Varsity continues to improve their performance on the court game after game.

This was only a slight bump in the road. The Aviators’ sportsmanship and skill will grant them a memorable season. Wish you boys the best!

If you want a picture to show with your comment, go get a gravatar.