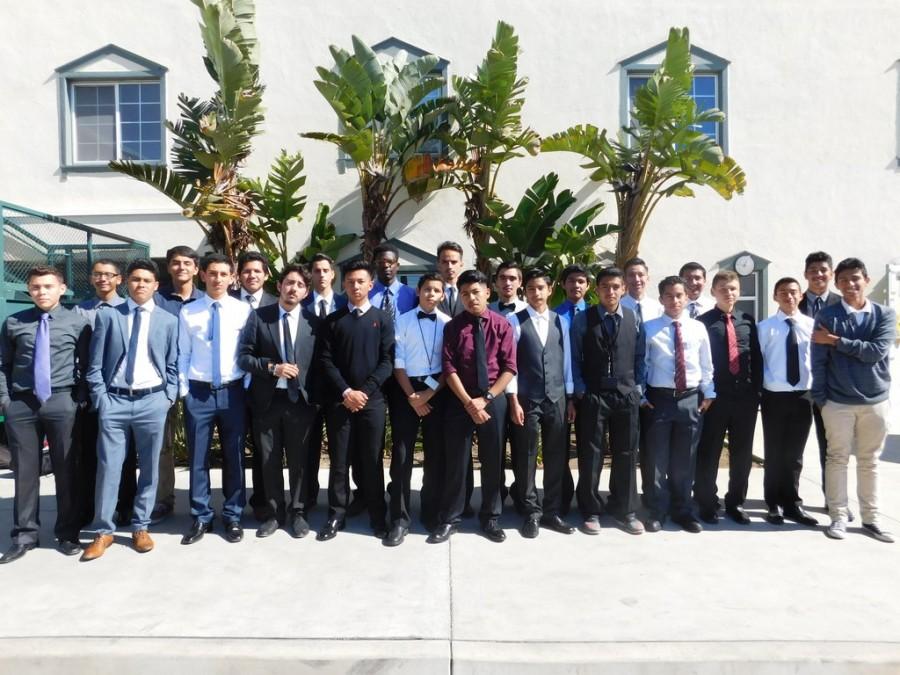 After a spectacular regular season, the boys' soccer team suited up for their first playoff match of the year. Photo provided by Randy Launius.

What a season the boys’ soccer team had! Their performance garnered them a much deserved position in the playoffs. However, everything wasn’t handed to the Aviators on a party platter. Early on in the season, the boys suffered a tremendous loss on the team when Andrew T., one of their main players, broke his leg.This injury put Andrew out of the rest of the season. Despite losing one of their star players, the Aviators had to move forward and managed to play without him. For the rest of the season, the boys dedicated every match to him: they would group up in the middle of the field and yell, “For Andrew!”

Reaching the playoffs was not easy and one of the key points that landed the boys in the postseason was their passing. Passing can be a good tool to use to move the ball up the field, but to also break the defense. In close situations, short passing would be the best tactic, which of course, the boys used. The boys would pass the ball around until the defense made a mistake and opened up an opportunity or they would pass the ball around until the defense got too tired to make a serious pursuit for the ball.

Aside from passing, the Aviators also utilized their pace. Some of the Aviators were part of the Cross Country team prior to joining the boys’ soccer team. This allowed our fellow classmates to be well fit, endure the entirety of the game and to make the crucial sprints to the ball in a defensive manner or in an offensive manner. Speed is key in soccer and without speed, defenders will have an easy job of taking the ball away. For a striker, speed is essential as chase the ball to open up goal opportunities. One notable person who presented exceptional speed on the Aviators’ team was Bryan R. In certain games, Bryan would zoom past the opponent’s midfield and defense with little effort and would make it all the way to the goal and score.
Overall the boy’s excelled this season with a record of 8 wins, 3 losses, and one tie. Some games were won by a margin of 3+ goals. One crucial tactic that helped the Aviators reach the playoffs and finish within the top 3 of the league is excellent leadership, sportsmanship and overall dedication to the team. Unfortunately, the boys lost their first playoff match against La Cañada, a school with 2600 students, with a score of 10-0, bringing the season to an end.