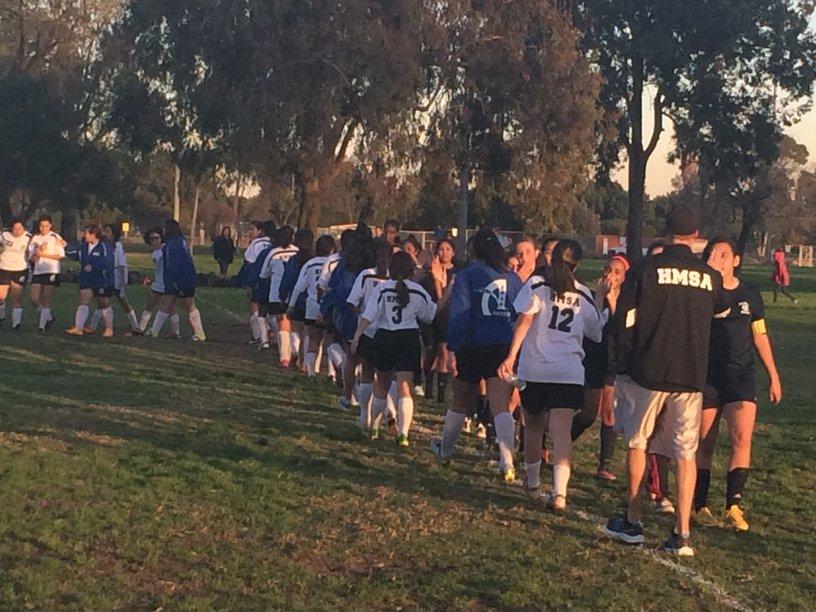 After the game, the Aviators lined up to show their respect to CAMS. Photo taken by Miguel Sanchez.

HMSA’s girls’ soccer team got set for a rematch against CAMS last Wednesday. Although they didn’t manage to win the match, they certainly performed better than their last meeting, with HMSA scoring more goals and CAMS scoring less than their last match.

Throughout the game, the ladies’ play style was intriguing due to its variety. During the first 10 minutes of the game, the girls played very defensively, which sadly didn’t work for them. Coach Kircher noticed this and began commanding them to “move up” and to play more offensively. Then, within the midpoint of the first half, the girls were shifting towards a more offensive play, despite returning to defensive play in the last minutes of the first half.

During half-time, Kircher informed the girls of how their defensive play style was not very efficient. He encouraged the girls to avoid “suicide defense” like they were doing and strive to “play more physically” instead. Then, just when the second half started, both Mr. Severns and Ms. Vazquez showed up to the game to cheer on for our Aviators. Kircher’s lecture seemed to have an immediate effect on the team. The girls played more offensively and eventually scored a goal later on in the half. The goal was scored by Celene S. The increased offense was also shown with the amount of chances HMSA created in comparison to the first half.

After the game, Coach Kircher came to talk to the girls declaring that “it was their best effort of the season,” and congratulated them for their efforts. He also stated that he would like to continue seeing the team “playing hard.” Mr. Severns and Ms. Vazquez also congratulated the team, with Severns declaring that “they played great” and showed “a lot of heart.” Ms. Vazquez also expressed the same feelings, saying that “it was the first time she saw the girls play [and] it was amazing” and that they showed “a lot of positive energy.” Despite the loss, the girls’ soccer team will be looking forward to their next game with lessons to carry with them.